Although the overall growth rate of the domestic auto market is slowing down, the pattern is quietly changing. After the overall sales of Japanese cars recovered last year, this year still maintained a good trend. In 2017, Japanese automakers will continue to add new cars to consolidate market sales. The online auto market has sorted out the plans of 13 Japanese automakers and found that the Japanese brand has launched 36 new models next year, including 18 SUVs, accounting for 50%.


At present, Corolla fuel and dual-engine models account for nearly 50% of FAW Toyota's total sales. In September this year, Corolla launched the 1.2T model. Next year, FAW Toyota will upgrade and upgrade this hot-selling model. The fuel version will be upgraded for appearance. It is still equipped with three engines of 1.2T, 1.6L and 1.8L. The dual-engine version is for the interior upgrade. The launch of the new car will enhance the competitiveness of its products.

In terms of the appearance of FAW Toyota's front, the front is based on the Guangzhou Automobile Toyota Hyun Hyun. The difference is that the new car uses a "Viking Face", the intake grille is a large mouth, using a large area of â€‹â€‹black mesh material, the body side and The rear part of the car basically retains the shape of the Hyun model, and only the internal lamp cavity of the taillight group has been modified. In terms of power, the new car will be equipped with two naturally aspirated engines of 1.3L and 1.5L, which are in line with the current Vios power system sold by FAW Toyota. The 1.3L engine is rated at 73kW, comparable to the Volkswagen 1.4L engine.

GAC Toyota enjoys the appearance and enjoys the creation of a Vios based on FAW Toyota. The front face design of the new car is basically the same as the new Hyun Hyun hatchback version already on the market. The side and tail designs are very close to Vios. In terms of power, the new car will provide 1.3L, 1.5L two small displacement naturally aspirated engines. The maximum power is 73kW, 79kW, and the peak torque is 123Nm and 140Nm. Both powertrains offer a 5-speed manual or CVT continuously variable transmission. In terms of power, compared with Rena, the 1.5L engine fuel economy has an advantage.

Lexus LC 500h
The Lexus LC continues the design of the Lexus LF-LC concept car. The front face adopts a spindle-type air intake grille, the headlights adopt the eagle eye design, the matrix type LED light groups are arranged in an inverted triangle, and the bumper has vents on both sides. Overall, LC applied the most forward-looking design concept of Lexus. In terms of power, the Lexus LC 500h is equipped with a 3.5L oil-electric hybrid system with a combined power of 264kW. The transmission system is matched with the Lexus new 10-speed automatic transmission.

Dongfeng Honda's new Jade new Jade reloaded the Honda family's new family-style air intake grille. The lamp set in the headlights has been redesigned, and the fog lights have been changed from the old round shape to the long strip shape. The rear end of the car is designed for the cash. In terms of details, the exhaust pipe below becomes double-sided and the TURBO mark is added to the tail. In terms of power, the new Jade will share the powertrain with the new Civic, equipped with a new 1.5T engine, and the 1.8L naturally aspirated engine will continue to be available, both engines are matched with manual and CVT gearboxes.

The Platinum Core Hybrid Platinum Core Hybrid overall model is not much different from the fuel version. The front grille is chrome-plated and integrated with the front headlights. In terms of details, the new vehicle wing and the trunk lid have added new energy vehicle logos, indicating their identity. In terms of power, the new car is equipped with a hybrid system of 2.0L naturally aspirated engine and electric motor, with a maximum power of 107kW and a peak torque of 175Nm, while the maximum motor power is 135kW and the peak torque reaches 315Nm.

In terms of the appearance of Guangqi Honda Crown Road 1.5T version, the 1.5T version of Guandao is not expected to have a big change. The crown road adopts the Honda family-style front face, and the thick flying wing type chrome trim strip runs through the net. The sharp headlights and fog lights add LED elements. The side of the car is full of sculptural and slip-back design, which makes the car feel like a coupe. The 1.5T model launched by Crown Road next year is expected to be powered by the Civic L15B engine with a maximum power of 130kW and a peak torque of 220Nm. On the gearbox side, it is expected to match a CVT continuously variable transmission.

è®´æ­Œä¸­å›½TLX
The domestic production of è®´ å›½äº§ è®´ will be lengthened in China, and the appearance will be consistent with the overseas version. In terms of power, the new car will be powered by 1.5T and 2.0T engines, matching the 8-speed automatic transmission. At present, the domestic CDX of Acura has used the 1.5T+8AT power system. The 1.5T engine used in the future domestic TLX is expected to be the same as the CDX, with a maximum power of 134kW and a peak torque of 240Nm.

The most obvious change in appearance of Dongfeng Nissan's new generation Qijun Xinqijun is that the front face has a thicker chrome finish and a wider mesh area. The outer grille has a larger outer contour and the front face. . As a compact SUV under Dongfeng Nissan, Xinqijun is expected to continue to carry the 2.0L and 2.5L naturally aspirated engines. The drive is matched to a 6-speed manual and CVT gearbox. Qijun's mid-term replacement model will soon be listed overseas and will be listed in China in 2017.

Zhengzhou Nissan New Paladin new car shape Founder, the front grille shape is very similar to Navara. Straight lines on the sides and tail of the body, equipped with large-size wide wheels, and a high ground clearance, guarantees the passage. The current model is powered by a 2.4-liter naturally aspirated engine. In the future, the new Paladin is expected to use a larger displacement or turbocharged engine and still provide a four-wheel drive system.

Infiniti Q30
The Infiniti Q30 follows the family-style large-area intake grille in its design, which is very similar to the overall line of the QX30 just listed. The new car air intake grille adopts the upper and lower split design, the bumper out design is more compact than the QX30, and the design of the fog light is also different. In terms of power, the Q30 will be equipped with the same 1.6T and 2.0T turbocharged engines as the QX30. The two engines have a maximum output of 115 and 155 kW and a peak torque of 250 and 350 Nm. The drive is matched to a 7-speed dual-clutch gearbox.

Mitsubishi Outlander PHEV
The appearance of Mitsubishi Outlander PHEV basically continues the design of the 2016 regular version, and only the details are adjusted. The car is equipped with a hybrid system consisting of a 2.0L engine and two electric motors. The engine has a maximum power of 87kW and a peak torque of 186Nm. The fuel consumption per 100 kilometers is only 1.9L. It is worth mentioning that the central control display equipped with the Outlander PHEV can display three drive modes automatically selected for different road conditions hybrid systems, including EV, series hybrid and parallel hybrid.

Road Blower mainly used in the cleaning work of road marking before construction, can also be used in asphalt paving of slit blowing irrigation, pavement cracks, remove dust and particles, and can also be used for outdoor sports venues and dehumidification drying, especially suitable for large square, machine field construction site cleanup, also the green leaves to clean sweep; need to apply a variety of work.

-Ensure the stability of the machine. 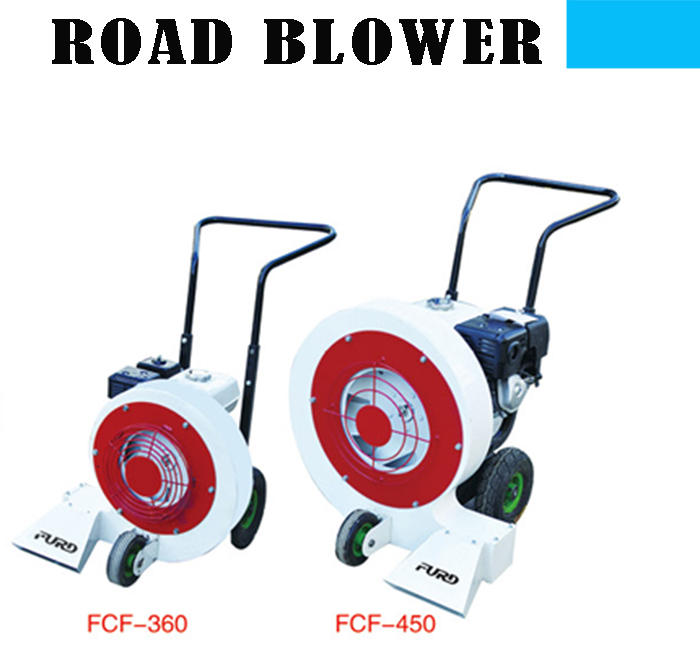