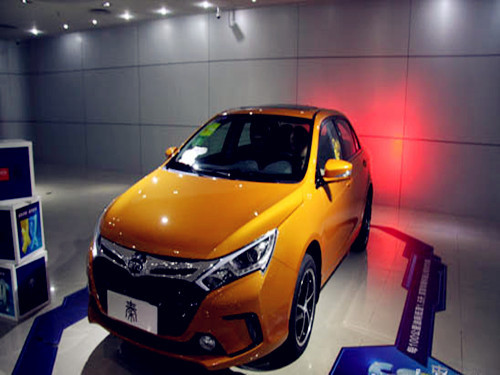 BYD believes that new energy is bringing opportunities to the automotive industry in this century. After entering the era of electric power, the source of the car's energy and its control methods have undergone fundamental changes. This is a disruptive change. The overall R&D strategy of BYD is based on this starting point.

With the further development of new energy, once the market is fully opened and people can generally accept it, BYD will no longer be a traditional car, but will put all body and mind on the development and utilization of new energy.

Production of mobile phone batteries, OEM IT, birth BYD battery industry, has created remarkable achievements in different areas. Since the acquisition of Xiâ€™an Qinchuan Automobile Factory in 2004 and the entry into the automotive industry, BYD has attached more importance to the development of new energy vehicles. It seems to be more unique than traditional automobile companies.

Last year, along with President Xiâ€™s â€œstate of the artâ€ of new energy vehicles and the continuous introduction of many favorable policies, auto companies were rushing to join them. With its many years of layout, BYD has risen in one fell swoop and stepped into the road of â€œsecond takeoffâ€.

What kind of company is this actually and what kind of understanding does the auto industry have? With this problem, a group of three people from the China Economic Network recently visited BYD Shenzhen headquarters, and during this period, they conducted an exclusive interview with Renlin, vice president of the BYD Automotive Engineering Research Institute.

Ren Lin said that â€œthe rise of new energy vehicles is generally considered to ease the energy crisis and change the energy structure, and BYD believes that new energy has brought opportunities for the 100-year automotive industry. Other companies supplement new energy and BYD hopes to New energy subverts the overall design of the car."

After entering the era of electric power, the source of the car's energy and its control methods have undergone fundamental changes. This is a disruptive change. The overall R&D strategy of BYD is based on this starting point.

Consumers have various concerns about new energy sources, such as cost, quality, and charging convenience. However, in fact, it can be completely abandoned in the charging pile. In life, electricity is everywhere and everywhere is desirable. "Cheap and easy to use, the charm of such products can not be rejected. But the only problem is that the policy has not been let go and it is not difficult to solve the charging problem." Ren Lin said.

With the gradual opening of the new energy vehicle market, BYD's "dual-mode" electric vehicles have been "hot" by the market, especially in cities such as Shanghai where restrictions are imposed. "Qin" is undoubtedly one of the most successful models. In the first four months of this year, "Qin" has sold 8894 vehicles.

Ren Lin said, â€œWe did not expect that there would be such a large amount. The biggest problem now is the lack of capacity. At present, BYDâ€™s battery capacity is about 4GWH per year, and it can be raised to 10GWH per year by the end of this yearâ€.

The hot sales of new energy products, coupled with the decline in the sales of traditional vehicles, has also led to the question of â€œBYD relies on subsidies to liveâ€.

It is reported that BYDâ€™s non-operating income reached 1.114 billion yuan in fiscal year 2014, an increase of 43.66% year-on-year. Among them, government subsidies amounted to 798 million yuan, an increase of 17.9% over the same period of last year, mainly due to Changsha Automobile Fundamental Research Fund grants and new energy industry support funds. In 2014, the sales volume of BYD's fuel vehicles fell by approximately 21.33% to approximately 370,000 vehicles.

In fact, traditional cars and new energy vehicles are not completely separated. According to reports, BYD is currently doing some technological innovations in traditional cars.

Perhaps a lot of people do not know that Renlin had been responsible for the technical research work of Qinchuan Automobile and came to BYD with the acquisition. Ren Lin recalled that in the negotiations for the acquisition of Qinchuan, the Shaanxi Provincial Government saw exactly the simplicity and simplicity of BYD Chairman Wang Chuanfu before it led to the acquisition in a very short period of time.

As we all know, Wang Chuanfu was born as an engineer. And "engineers are more simple and direct, and they are often not right about people. People are also more inclined to be practical and willing to do it."

According to Ren Lin, in BYD, employees will not be restricted. Instead, they are encouraged to â€œfantasticâ€ and boldly trial and error. Through Ren Lin's description, BYDâ€™s corporate culture is also indirectly demonstratedâ€”simple, practical, and encouraging innovation.

Perhaps it is this simplicity that makes BYD appear "out of tune". However, when the self-owned brand encounters a â€œ12 consecutive declinesâ€ and the market share has shrunk repeatedly, is such â€œsimpleâ€ and â€œencouragement for innovationâ€ not exactly what the independent brands need?

Surface Finish:
Mechanically polished and electropolished are available for our products.
Tube and Fittings: Ra0.4, Ra0.6, Ra0.8 or specified