Since entering this year, the light truck industry has become more competitive. Under the strong impact of new entrants, the market share of the old light truck companies is constantly eroded.

With the gradual convergence of marketing methods, it has become an old-fashioned company's focus to understand how to seize the hearts of customers and expand sales.

Recently, Jianghuai Automobile Co., Ltd., a leading company in the light truck industry, and Nanjing Iveco, a joint venture company, frequently launched the "LCC" strategy and "flat storm" activities to boost their marketing. Although the names are different from each other, but from the perspective of reminding users to pay attention to the use of costs, the new thinking of selling out the car.

Guide users to understand the full life cycle of the vehicle

When it comes to costs, car buyers often pay attention to the first purchase, it is easy to ignore the cost of use, but will not think of the residual value of used cars.

Mao Wenjun, deputy general manager of Nanjing Iveco Jingjin Branch, told reporters: â€œWe have calculated a potential account for potential buyers and calculated all the costs of buying a car and using a car. This tells users that buying a car can't just look at the initial price of the car. Consider lifetime use costs."

Where is the province?

According to Mao Wenjunâ€™s calculations, truck users generally change their car in about 3 years and the vehicles that are eliminated are sent to the used car market. The National II leap forward to the new light truck plus all the commissions will cost about 60,000 yuan, and the used car will have a residual value of 20,000 to 25,000 yuan. The State III light truck with the Sophim engine is priced at more than 90,000 yuan, plus other expenses of more than 100,000 yuan. However, the residual value of used cars increased to 40,000 to 50,000 yuan, which is 1 times higher than the residual value of China II products.

He told reporters that after the improvement of quality, the leap-in green wind light truck has a fuel consumption of less than 10 liters per 100 kilometers, and the previous national II product has a fuel consumption of over 13 liters per 100 kilometers. According to their statistics, commercial vehicle users generally drive 85,000 kilometers a year. From this, it can be deduced that only 12,000 yuan can be saved every year by oil money, and 36,000 yuan in 3 years. The failure rate of the National III Leap Light Truck was only 1/3 of that of the previous product, and the maintenance cost has dropped significantly, and the corresponding attendance rate has increased.

"The added salvage value and saved oil money are about 60,000 yuan, while the price of the new State III light truck is 40,000 yuan more expensive than the State II light truck. The 20,000 yuan profit is calculated as such," Mao Wenjun said.

Jianghuai related sources told reporters that fuel-efficient trucks is a systematic project that must be fully considered. The 4DA1 series engine developed by the company can reduce the fuel consumption of JAC light trucks by 1 to 1.5L per 100km. In terms of maintenance and repair costs, JAC's standardized and reasonable prices also benefit users.
"More importantly, we have noticed the lifetime cost of vehicles, implemented the concept of the whole life cycle in product development, and considered the problem of reducing the failure rate, increasing attendance, and improving the quality of products from the source." .

"Do not fool consumers."

â€œDo you like this afterwards. Can consumers accept it? Will they think that there is moisture inside?â€ the reporter asked Mao Wenjun.

"Our product's fuel-saving performance is derived from professional testing, and also a lot of reference to the real fuel consumption of competitors, at least able to achieve fuel savings than similar products." Mao Wenjun assured the reporter.

Senior market participants pointed out that the sales of commercial vehicles rely on media propaganda, and the second is on user word-of-mouth communication. If manufacturers advertise that fuel economy can reach 25%, the user feels that only 20%, the manufacturer's publicity has exceeded the user's psychological expectations.

â€œEconomy is also about seeking truth from facts, and the cost account should be real. Otherwise, consumers think there is a lot of water here.â€ Mao Wenjun said, â€œWe sometimes find that the fuel saving rate is higher, but we will not exaggerate publicity accordingly.â€

JAC also stressed: "When calculating the cost of use, we must not underestimate the consumer's IQ, and flicker them. Selling a car is a long-term business. Even if consumers can achieve a temporary increase in sales, it is still the manufacturer itself."

Water chilled type, equipped with Air Cooled Water Chiller or Water Cooled Chiller to cool, heat the target and at the same time to purity the air, which will make people feel comfortable.

Amrta patented Air Handling Unit uses our newly developed patented structure; mainly constructed with air filter, heat exchanger, fan motor, fan blower and other main components; it can meet with different external pressure requirements; tight unit structure, light unit weight and good cooling/heating performance. Direct paneling assembly structure and the frame is made of patented alloy aluminum constructed structure, joined together as a cabinet frame system. Not only ensure the cabinet is air fight, but also eliminate thermal bridge and enhance the rigidity and strength of the unit. The products are of small size, low noise hence it Is widely applied in the comfortable Air Conditioning system such as the hotel, commercial building, office and underground railway application.

Operation & Maintenance
1.Before the unit operation, check the water pipe valves system and duct equipment. Make sure everything is under good condition.
2. Check the fan motor and blower moving parts regularly for their connection, operation and rotating direction. Readjust it if necessary.
3. Air filter cleaning should be carried out every month before and during operation.
4. During winter, coil water should be drained out if not operating. If the unit needs to operate during winter time, make sure when the unit stops running, the coil water must circle the system and the fresh air damper must be closed to prevent coil freezing. If the unit stops operation for a long duration, coil water must be drained out.
5. Clean soft water must be used for chilled water and hot water system. Every year, wafer chemical treatment must be performed to eliminate the contamination in the system and apply compressed air or wafer for cleansing the fin coil surface, drain pan and U-trap bend.
6. Regular checking must be performed for the motor bearing lubrication condition and belt tightness. 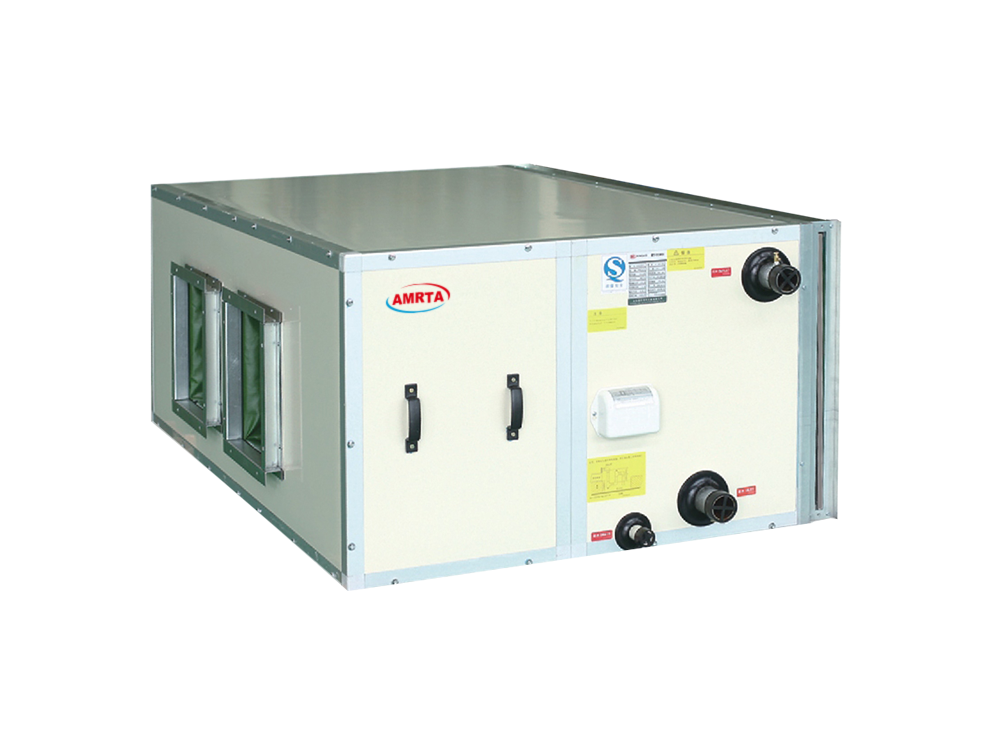